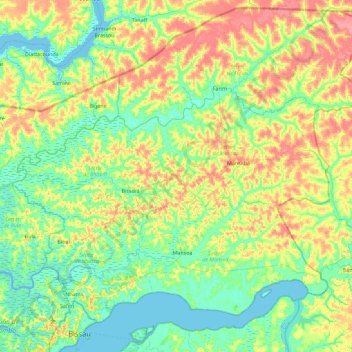 All the inland regions have a maximum elevation of 300 m (980 ft). The internal region has plains, which are interspersed with rias. There are lot of meandering rivers, many of them forming estuaries in the coastal regions. The principal river, Rio de Canjambari, flows through the region. The climate is hot and tropical and the region has two seasons. The onset of summer is from December to May with April - May period having temperature ranges from 20 °C (68 °F) to 30 °C (86 °F). The rainy season is usually from May to November. The region receives an average rainfall of around 1,000 mm (39 in) compared to the coastal regions, which receive 2,000 mm (79 in). The internal regions are covered with savannah or light savannah woodland.