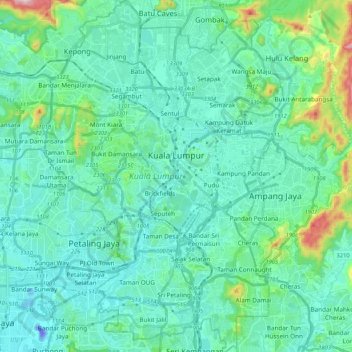 Located in the centre of Selangor state, Kuala Lumpur was a territory of Selangor State Government. In 1974, Kuala Lumpur was split off from Selangor to form the first Federal Territory governed directly by the Malaysian federal government. Its location in the most developed state on the west coast of peninsular Malaysia, which has a wider stretch of flat land than the east coast, has helped it develop faster than other cities in Malaysia.[79] The municipality covers an area of 243 km2 (94 sq mi),[2] with an average elevation of 81.95 m (268 ft 10 in).[80]