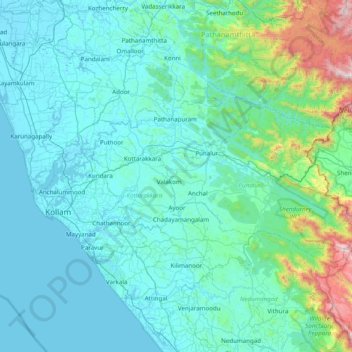 Kollam district (formerly Quilon) is one of 14 districts of the state of Kerala, India. The district has a cross-section of Kerala's natural attributes; it is endowed with a long coastline, a major Laccadive Sea seaport and an inland lake (Ashtamudi Lake). The district has many waterbodies. Kallada River is one among them, and the east side land of river is EastKallada and the west side land is WestKallada. Kallada Boat race is one among the famous festival events of district. Even though it is a competition between two land sides of the river, many boat clubs from various place,s even beyond the district participate in the event. Kollam is the capital of Kerala's cashew industry. Plains, mountains, lakes, lagoons and backwaters, forests, farmland and rivers make up the topography of the district. The area had trading relationships with Phoenicia and Ancient Rome.